Whatever your fancy, we have something for everyone!

Find the perfect yacht for your next adventure.
Begin Search

Yacht Chartering with AYC is easy! Make your reservation today!!

Boating in the Banana Belt

Northwest of Seattle, Washington, lie several groups of islands that are nestled in between mountain ranges to the North, South and to the East.

The protected waters that surround these islands are a closely guarded secret of those who have discovered this Northwest oasis. Although the Pacific Northwest receives a significant amount of rainfall, these cruising areas are situated in the lee of three different mountain ranges that create a rain shadow yielding a wonderful micro climate. 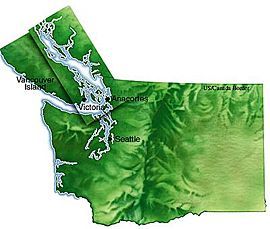 This Northwest "Banana Belt" includes areas with annual precipitation of 15" or less. This region also enjoys a very comfortable temperature range year-round. Combine these characteristics with the native wildlife and majestic scenery, and you have a recipe for some of the world's finest cruising.

The above illustration shows the storm-blocking effects of the Olympic Mountains. While the precipitation at the Olympic's peaks increases to 200 inches, the phenomenon commonly called the "Banana Belt" effectively reduces the precipitation in the adjacent islands, producing a much sunnier climate. Below is a list of annual rainfall in inches.

Anacortes Yacht Charters GUARANTEES: Should you have a breakdown during your charter, we will complete repairs within 4 (four) hours of notification for any vessels within 20 miles of our charter base. Specific systems that render the yacht inoperable will be covered under this guarantee, although ALL repairs will be dealt with for you. You will be compensated for any additional time lost past that grace period. Compensation, based on the Yacht Fees on the Invoice accompanying your charter paperwork packet, will be in the form of either extra time on this current trip, if available, or a Cruising Credit for a future trip.